When your publisher finally gives you the release date for your novel, you start planning. You’ve been through multiple rounds of edits, decided on the book cover, have the book’s final PDF, ordered the advance review copies in print, devised a list of to whom the ARC will be sent after emailing those in the media asking for permission to send, created a folder on your computer delineating with whom you’re in correspondence,  contacted book-bloggers, and organized a schedule on social media that walks the fine line of pre-release promotion and too much grandstanding, and, in my case, created a book tour that involves travelling to the Deep South from California.

I had my book tour for Little Tea planned so seamlessly, even I was impressed. I’d leave for Memphis on June 14 and stay in the Mid-South for ten days. I knew where I was going to stay, had scheduled a rented car for pick-up, an itinerary that included nine events, and embraced the logistics of running from pillar to post because it was going to be worth it. I’ve always said the best way to promote a book is to show up in person. Memphis is a long way from Malibu, but I grew up there, Little Tea is set in the region, people know me in Memphis, and the way I saw it, hustling down there would be a wise move. I did this on a small scale with my third novel, Mourning Dove, and it went so well, I figured I’d widen the parameters with Little Tea to include Lemuria Book Store in Jackson, Mississippi, and the Blytheville Book Company in Blytheville, Arkansas. The planning for Little Tea’s book tour took weeks, but I was all set to go!

Then the pandemic hit, and for months, I waited for the jury to come in on how big the impact would be. It seemed many of my scheduled tour stops held onto hope until its last gasping breath before they conceded defeat.

In stages, venues that had never thought about restructuring their business operation found a way around closing their doors. Book stores started curb-side service, looked at their in-store author event schedule and decided to hold the events via Zoom. Then libraries got on board, as did radio and TV stations. It took a while for everyone to adjust to the new normal, but by Little Tea’s May 1st release date, everyone had switched to Plan B.

I spent a week canceling everything that had gone into my trip and emailing back and forth with my book tour hosts about how to proceed. The result is that I never left my office. My husband, as luck has it, is an audio engineer and knows his way around sound and lighting.

Last week, I did my Little Tea book tour virtually, and I had a blast.

I prepared by drawing the curtains to a close behind my desk, which I hadn’t done once, in all my years of living by the ocean in Malibu, California. I had to clip them together so my desk’s monitor could see me. The overhead lighting above my desk was muted, a lamp was staged behind my 27 inch monitor, and a scarf was wrapped around the shade of my standing desk lamp. My monitor doesn’t have a microphone, but my laptop does, so I steadied it on a stack of books until the devise was close to eye-level. I replaced the wheeled swivel chair before my desk with the hardback chair from my husband’s office. Because I wanted what would appear behind me on-camera to look pretty, I put my mask on, drove down the road, and came home with this:

Here is how my office lighting turned out, as photographed as a screen-shot of my laptop:

My first Zoom meeting was with The Memphis Public Library. Fourteen avid readers joined and the meeting lasted for an hour. I did a thirty minute presentation concerning Little Tea’s premise, characters, and setting, along with how I arrived at the book’s idea. A question and answer exchange ensued next, which, for me, was the best part. 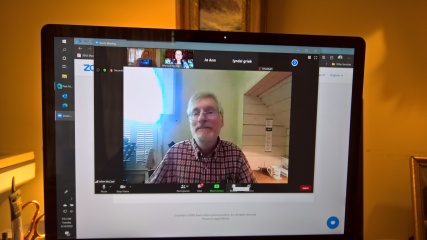 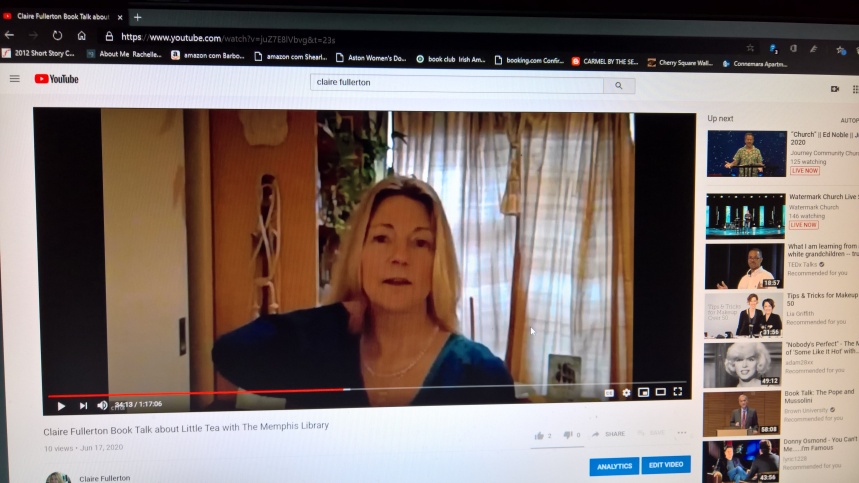 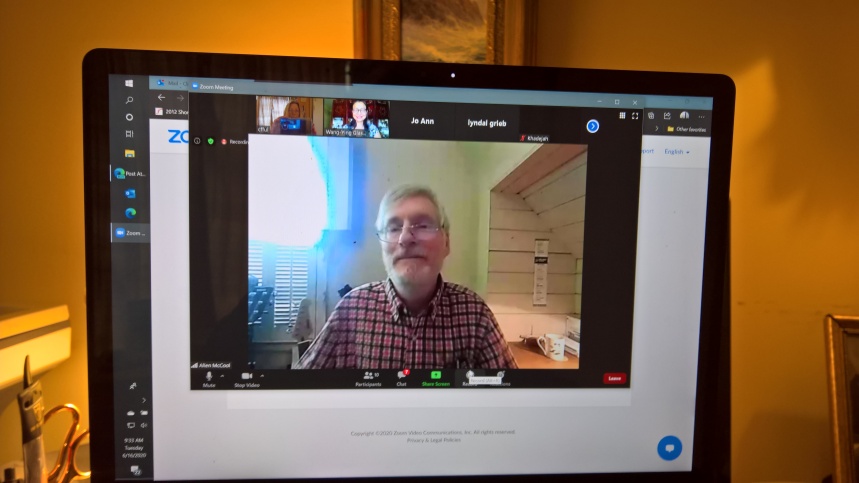 Another Zoom meeting was with WREG TV’s Live at 9 morning show with Memphis’s beloved Marybeth Conley. Let me say that 9 AM Memphis time translates to 7:00 AM in California, but the early rise was worth it!

Later that day, I had the best time, ever, as the guest of Memphis’s iconic broadcaster, Earle Farrell. We had so much fun naming our mutual acquaintances that talking about Little Tea took a back seat! Earle Farrell has had an illustrious career in media. He’s worn every shoe from reporter to anchor, and his Earle Farrell 4 Memphis show has the benefit of Facebook streaming.

I met with book clubs last week and was thrilled Last Sunday, when a Memphis friend texted me this, which kicked off the week with high-coverage of my local Zoom appearances. 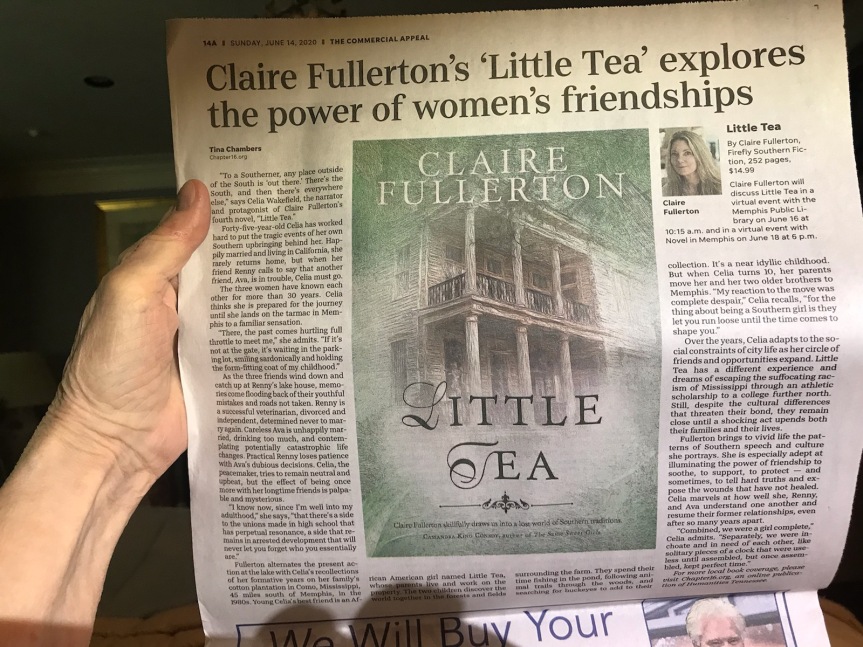 The highlight of my week was a sold-out author webinar, hosted by the wildly popular Novel Book Store and moderated by fellow author, Susan Cushman, who did a first-rate job asking me questions and fielding reader’s comments. Susan Cushman is an adored author in South, and that she agreed to moderate the event was a gift beyond reason. For one author to interview another guarantees all bases will be covered! I cannot thank Susan Cushman and Novel Book Store enough. 100 attendees joined and the experience exceeded my expectations.

I have a few more Zoom meetings schedule before my Little Tea tour concludes. The great thing about doing a Zoom event is that those who missed it can watch it at their convenience on my YouTube Channel, which can be found by going to YouTube and typing in Claire Fullerton! 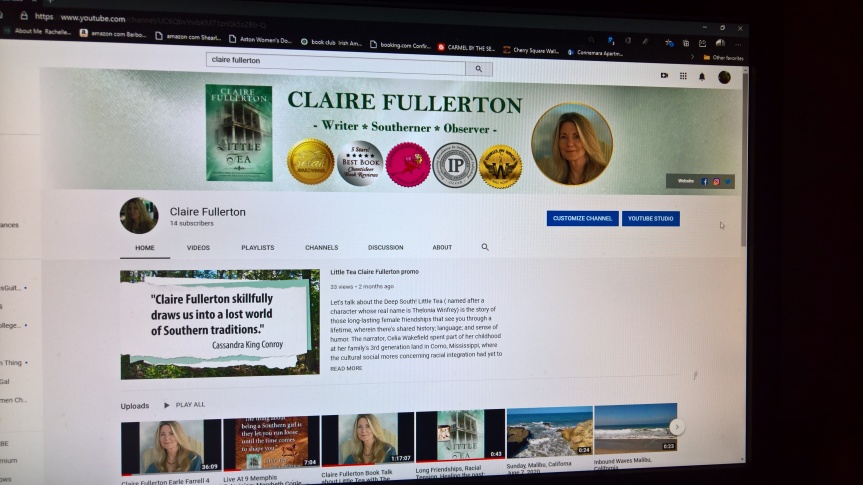 All told, it was a great week, and although the pandemic precluded in-person appearances, I am infinitely grateful to all who made adjustments and accommodated my schedule.

7 thoughts on “A Week of Zoom Meetings for Little Tea”