I’m thrilled to tell you about Queen of the Owls by Barbara Linn Probst. It’s women’s fiction, about a woman who evolves into her own when she begins research on the artist, Georgia O’Keefe.

Here is Queen of the Owls Book Description:

A chance meeting with a charismatic photographer will forever change Elizabeth’s life.

Until she met Richard, Elizabeth’s relationship with Georgia O’Keeffe and her little-known Hawaii paintings was purely academic. Now it’s personal. Richard tells Elizabeth that the only way she can truly understand O’Keeffe isn’t with her mind—it’s by getting into O’Keeffe’s skin and reenacting her famous nude photos.

In the intimacy of Richard’s studio, Elizabeth experiences a new, intoxicating abandon and fullness. It never occurs to her that the photographs might be made public, especially without her consent. Desperate to avoid exposure—she’s a rising star in the academic world and the mother of young children—Elizabeth demands that Richard dismantle the exhibit. But he refuses. The pictures are his art. His property, not hers.

As word of the photos spreads, Elizabeth unwittingly becomes a feminist heroine to her students, who misunderstand her motives in posing. To the university, however, her actions are a public scandal. To her husband, they’re a public humiliation. Yet Richard has reawakened an awareness that’s haunted Elizabeth since she was a child—the truth that cerebral knowledge will never be enough.

Now she must face the question: How much is she willing to risk to be truly seen and known?

I read an Advance Review Copy of Queen of the Owls, and am sharing my book review:
A beautiful, deeply thoughtful novel concerning a woman who dares to break her own conventions by following what has heart and meaning. Author Barbara Linn Probst has written a contemporary story with timeless themes, and she has done so through the power of an engaging page-turner. Queen of the Owls depicts the day to day life of young wife and mother, Elizabeth, who juggles writing her thesis as a Ph.D. student teaching undergraduate courses while researching a significant time in photographer Georgia O’Keefe’s life. This is a soulful, searching novel about the repercussions that come when one woman is inspired by another; about balancing one’s obligations while exploring the voice within that speaks on an individual level. As Elizabeth is tentatively lured deeper and deeper into Georgia O’Keefe’s unconventional life, a mirror is held to her own and she finds it lacking. When she is drawn by chance to artistic photographer, Richard, whose ethos captures what lies beneath the surface, the predicament she finds herself in is poignantly metaphoric. Queen of the Owls takes no hard and fast position on either the definition of nor prescription for a woman’s happiness, rather, it weaves its message through the power of suggestion in a deftly crafted novel and invites the reader to examine their own understanding.

I interviewed Barbara Linn Probst about Queen Of The Owls, when I had the pleasure of meeting her in Jefferson, Texas at the Pulpwood Queens Girlfriend Weekend, where we both wore the standard tiara and enjoyed a weekend of meeting wonderful readers from many Pulpwood Queen book club chapters, who’d traveled for the annual event from far and wide.
Barbara Linn Probst is a writer, researcher, clinician, and “serious amateur” pianist living on a historic dirt road in New York’s Hudson Valley. 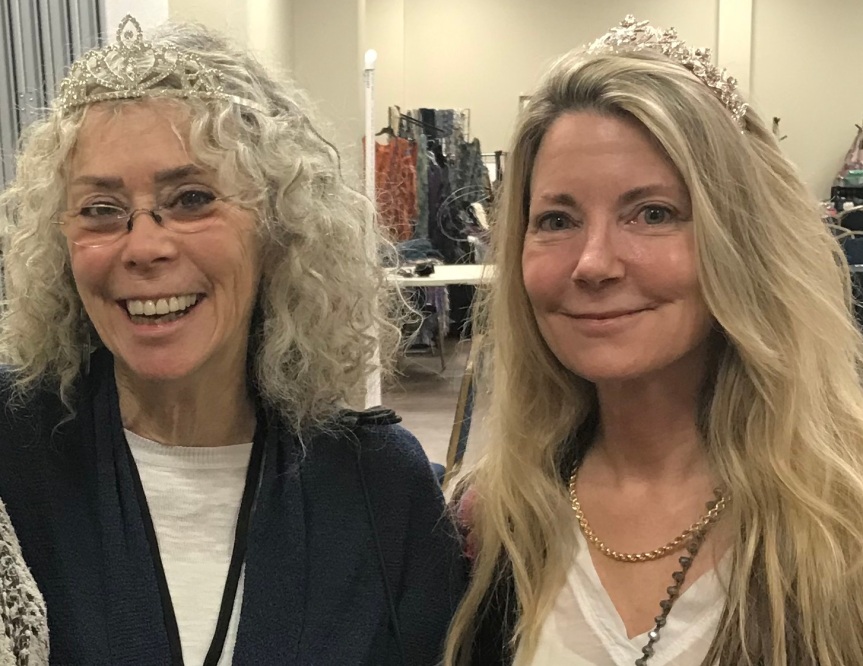 In a couple of sentences, can you tell me what Queen of the Owls is about?

Queen of the Owls is about a woman’s quest to claim her neglected sensuality and find her true self hidden behind the roles of wife, mother, sister, and colleague. It’s a story of awakening and transformation, framed around the art and life of iconic American painter Georgia O’Keeffe.

Okay, you’ve hooked us! Now tell us a bit more.

Elizabeth, the protagonist, has always defined herself by her intellect. She’s chosen the safe responsible path—and avoided the sensuality she assumed was beyond her reach. During the course of the story, she comes to know and embrace a fuller knowledge of herself, body and beauty as well as brain. There’s a price to pay, but Elizabeth knows she can’t go back.

While the book’s overarching theme is about wholeness—which you can only find by claiming the parts of yourself you’ve denied—it also explores contemporary issues of privacy, consent, feminism, and the power of social media to upend our lives.
Tell us about the role of Georgia O’Keeffe in the book. Why O’Keeffe?

The idea of framing the story around the art and life of iconic American painter Georgia O’Keeffe really just “appeared” to me! I’ve always loved O’Keeffe’s paintings; they called to me in a way that felt very connected to the question of what it means to be a woman. And in doing research for the book, I learned so much more about her life and work—which, in turn, enhanced the story in ways I hadn’t expected.

O’Keeffe has been a figure of endless fascination for over a century, not only for her artistic genius, but also because of how she lived. She was the quintessential feminist who rejected the feminists’ attempts to turn her into their matriarch, the severe desert recluse who created some of the most sensuous art of all time.

Although the story is framed around the art and life of Georgia O’Keeffe, O’Keeffe isn’t a character in the book—yet she’s present as Elizabeth’s inspiration, the person whose blend of austerity and voluptuousness Elizabeth longs to emulate. In seeking to understand O’Keeffe, Elizabeth comes to understand herself.

Art worked perfectly as a vehicle for Queen of the Owls because the story is about Elizabeth’s yearning to be truly seen. And through being seen, to be known.

What unique challenges did writing this book pose for you?

One of the most demanding aspects of writing Queen of the Owls was the range of research I needed to do. As a first step, I needed to learn far more about Georgia O’Keeffe than would ever find its way into the final book. I read everything I could find, went to see her paintings, talked to experts, visited the places where she lived and worked. I needed to immerse myself in her life and art in order to feel, understand, and convey what that might have brought Elizabeth.

What has been the most rewarding aspect of having written Queen of the Owls?

One of the reasons that writing Queen of the Owls has been so meaningful to me is because it represents a fictionalized version of my own journey. Like Elizabeth, I grew up labeled a “brain” and had to embark on my own journey to wholeness.

Queen of the Owls releases on April 7. You can order it through your favorite independent book store and all book outlets online.

You can read about Barbara at barbaralinnprobst.com