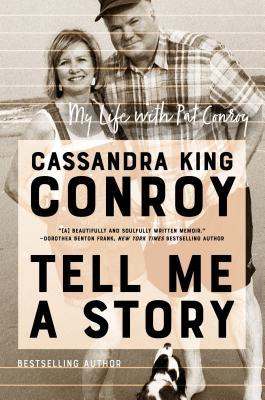 Tell Me a Story: My Life with Pat Conroy is a gift from the heart. Popular author, Cassandra King Conroy must have intuited that legions of her husband’s devotees wanted his wife to speak. Many of us had incorporated Pat Conroy into our lives. We were on an intimate level with the author who bared his soul through story, so when he died, we were blindsided. We hadn’t been given enough time to wrap our minds around a Conroyless world and were totally unprepared. So, Cassandra King Conroy stepped up. In the age-old tradition of a dyed-in-the-wool Southerner, she put her own grief aside and did for others in the only way Southerners know of: she told the entire story with endless detail and heartfelt panache. She gave us exactly what we wanted.

What strikes me about this memoir is its similarity in spirit to all things Pat Conroy wrote. Many of us heard Conroy explain the magic behind his writing by saying he wanted to explain his life to himself in hopes that readers would understand theirs. He unfurled his life on the pages in an artfully veiled manner, and it worked. In Tell Me a Story, Cassandra King Conroy removed the veil completely. With an honesty that can only be described as sheer bravery, she gave us the unvarnished truth, revealing the humanness of not only Pat, but of herself and those lucky enough to be a part of his orbit. The memoir is spellbinding, engaging, heart-tugging, and hilarious. Parts of it read like a madcap ride through a comedy of errors, for how best to describe a union forged later in life, replete with two cause and effect, complicated backstories seeking a semblance of harmony. And yet harmony was achieved, and that bird of a different feather soared. Cassandra King Conroy’s memoir is the construction of a life cobbled together by two world-class authors. It is deeply confessional and told in a voice you’ll never want to quit.

3 thoughts on “Tell Me a Story: My Life with Pat Conroy”