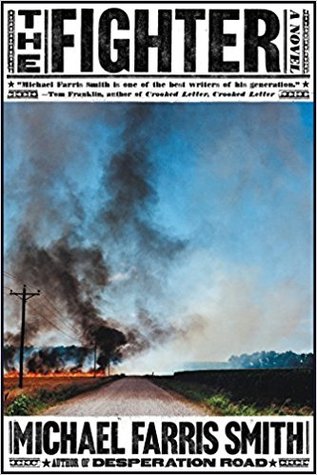 The most salient aspect of this compelling story is author Michael Farris Smith’s economic, straight-forward writing. The Fighter is a tight, gritty story written in pitch-perfect Delta colloquialisms that hand the reader an attitude as a working frame of reference. From the get-go, the reader knows the main character, Jack Boucher, was dealt a raw deal. Unceremoniously abandoned by his parents while still in diapers, any reader with a beating heart is immediately invested in Jack’s unfortunate origins. When he is fostered by a single mother with her own cross to bear, the reader is lured page-by-turning-page, in the underbelly of a Deep South setting, hoping to see Jack take what little stability he has and scratch his way to better circumstances. That Jack Boucher grows up to be a fighter is a construct that operates in multiple layers, within a life built much by his own design. A through line of conscionable humanness staggers Jack onward, and there is much in this hubris suggested story to which the reader can relate. For all the reasons I love the author Ron Rash, I applaud Michael Farris Smith for deftly weaving a handful of character intensive threads into a deceivingly simple story. The Fighter is a book that packs a punch of resonance. Though its impact is immediate, its aftermath grows.

2 thoughts on “The Fighter by Michael Farris Smith”