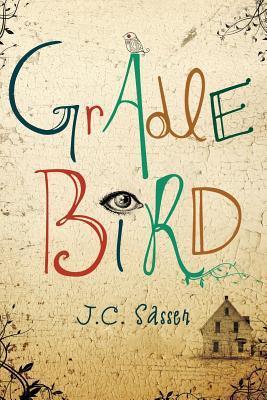 Just when I thought I had a handle on the meaning of southern fiction, on its deep-rooted history, its significance of family and sense of community, J.C. Sasser comes blazing in with both barrels to turn all notions of southern fiction on its ear. The characters in Gradle Bird conduct themselves with similar surprise—they don’t walk through a door, they bust through it; they don’t take a drag on a cigarette, they rip it.

Sixteen-year-old Gradle Bird doesn’t know her backstory. She lives in a truck-stop motel with her grandfather, Leonard, until they move to a dilapidated, haunted house in small town Georgia. All she wants is for Leonard to look her in the eye and tell her about her mother. Leonard won’t, and Gradle doesn’t know why. But Leonard is haunted by his own backstory, which unfurls in the attic in the arms of a half-dead dancing ghost. Caught in his own history, Leonard doesn’t pay attention, when two local ruffians named Sonny Joe and Creif ride up in a truck and whisk Gradle to a junkyard, where the wheels of the story are set in motion at the house of a sixty-year-old King-Fu kicking, guitar playing, country music singing, dumpster-diving orphan named Delvis, who is one of the more endearing eccentrics to ever grace a novel. Sonny Joe and Creif intend to impress Gradle by making mischief at Delvis’s expense, but things go wrong and result in Gradle and Delvis’s enduring friendship, which, the reader discovers, has its own uncanny ties that bind. This is a southern story that hallucinates; a rollicking, free-association, stream of consciousness joy ride defying description for all its air-tight perfect sense.

I absolutely loved this story. I won’t cheapen Sasser’s one of a kind voice by saying it’s quirky, rather, it is refreshingly and unapologetically right on. This is an author who won’t insult the reader by bowing to the temptation of explaining anything that could be interpreted as the oddities of the South. A main character sits at a table in a wife beater. There’s nothing campy happening here, it is simply the story’s state of affairs, best described by Delvis, who ain’t bragging, he’s just giving the reader the facts.

Read Gradle Bird and expand your horizons. Start at page one and strap yourself in. Do what I did and savor each uniquely spun line. Finish the book, and if you get your head back, run tell all your friends.

Claire Fullerton is the author of A Portal in Time, and Dancing to an Irish Reel. http://www.clairefullerton.com