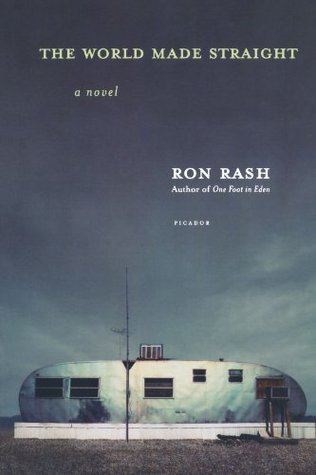 There’s a good reason the Atlanta Journal Constitution called Ron Rash “one of the major writers of our time.” To me, he is this and more. Ron Rash writes in a gritty, mountain vernacular that can’t be faked; one has to come from it and know it as their own voice of consciousness in order to wield it as plausibly as he. Rash’s language, therefore, is its own reasoning; it speaks of a clear-cut, hard-edged, uncompromising way of living in the world devoid of the illusion of optimism. One wonders, as they read Rash, if it is the jaded wrappings of cynicism or the unvarnished truth behind his tightly crafted novels. This is a writer who delivers the dark notes of beaten humanity in such a way that there is hope. In The World Made Straight, Travis Shelton comes from nothing, on the cusp of manhood in an unforgiving North Carolina mountain community, where drug-dealing is a viable livelihood, in this hardscrabble region with few opportunities outside of one’s own wits. It is the glimmer of something more that drives him to prove himself to his rough-hewed, hard-nosed father. Travis seeks to better himself after one fight too many; he leaves the tobacco fields on his family’s land and presents himself at the trailer of a local named Leonard, who is both drug-dealer and mentor, in that he is the only one in Travis’ sphere who, at one time, amounted to anything, though fate made it short-lived. Under Leonard’s influence, Travis pursues his high school GED, while shouldering the fall-out of the one false move he made, when he riled the shackles of local heavy-weight, Carlton Toomey, when he trespassed on his land. These are mountain characters who play by their own lawless rules, in a landscape where it’s every man for himself. In a climate still stinging from the horrors of the Civil War, the characters are born beneath the shadow of the ties that atavistically bind them, albeit through a sense of random tribal placement that haunts this story in an unfolding mystery, the impact of which the characters are not completely aware, until the looming puzzle work fits. It is a small world, in The World Made Straight, but it is universal in implication. Self-worth, justice, revenge, and hope against all odds flavors this story, which ends in notes of satisfaction and just deserves.

3 thoughts on “The World Made Straight by Ron Rash”